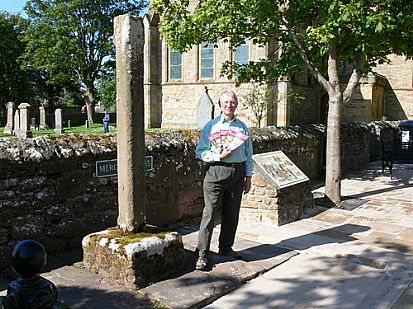 In 2011 the museum produced versions of the popular Dornoch Heritage Trail Guide in five languages, English, French, Spanish, German and Gaelic. This marked the first instance of a museum booklet publication in Gaelic, accomplished with the generous assistance of the Highland Council translation services.

In the process of producing the French, Spanish, German and Gaelic versions of the Trail Guide, which takes visitors on a tour of the historic landmarks of Dornoch, in the opportunity was taken to introduce line drawings relating to the text and to provide a glossy, colour cover.

The guide, priced at £1.99 to cover printing and production, is available in the museum shop and at a stand in the Dornoch Tourist Information Centre.

Museum Curator Peter Wild is seen holding copies of the five versions of the guide at the Mercat Cross in the High Street, Dornoch which is one of the locations featured in the guide. 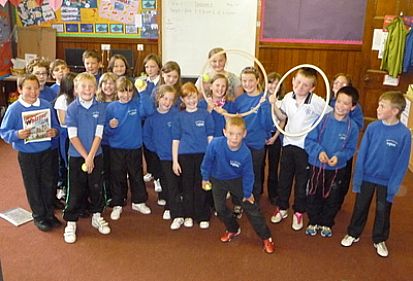 This project sought to explore, collect, document and re-enact, through the medium of film, the old games played in the Parishes of Dornoch and Embo. The museum continued its successful collaboration with the local school, as well as developing the community intergenerational aspects of project activities. The outcome of the project was a short narrated film showing re-enactments of the old local games and rhymes from this area and a local games and rhymes booklet produced by the participants . The museum used this opportunity to enhance its childhood collection and construct a permanent games area outside the museum.

At the end of the project the film was shown to the participants, Dornoch Primary School Class P5 and each child was given a copy of the DVD.

Presentation of DVD & CD pack to Heritage Societies and Centres 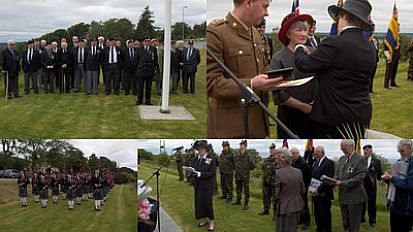 'Armed Forces Day', which is now celebrated UK wide on the last Saturday of June, is the opportunity for everyone to join together to pay tribute to our Armed Forces, past, present and future. On the day itself, and in the period leading up to it, events take place across the UK, ranging from national and regional celebrations, to local events. One of the official activities which occurs to observe the start of the week, is the raising of an unique Armed Forces Day flag within all the Boroughs, Districts and County Council areas in the United Kingdom.

At the Flag Raising Parade held at Drummuie on Monday 20 June 2011 Dr Monica Main, Lord Lieutenant of Sutherland, presented the Queen Elizabeth Cross to Mrs Olive Kinnear of Brora in respect of her son Sergeant Donald Bruce Kinnear, Royal Army Pay Corps, who was killed during the 1991 Gulf War. Mrs Kinnear was accompanied by her daughter Hazel. The Elizabeth Cross and Memorial Scroll are granted to the next of kin of UK Armed Forces personnel, who have died on operations, in national recognition of their loss and sacrifice. The Elizabeth Cross is not a posthumous medal for the fallen but an emblem demonstrating tangible national recognition of Service families for their loss.

Following this special presentation, Mrs Flower Thomson Deputy Lieutenant presented veterans with their badges and, to mark the 2009 and 2010 Drummuie ceremonies, representatives from all the Heritage Societies and centres in Sutherland were presented with a pack containing a booklet, CD and two DVDs for preservation in their archives. The pack presented to Dornoch Heritage Society now features on the Historylinks Archive so that the contents may be made available to the widest possible audience. (Enter 10260 in the Historylinks Archive search box and then use the 'Next' link below the image description to view successive images). 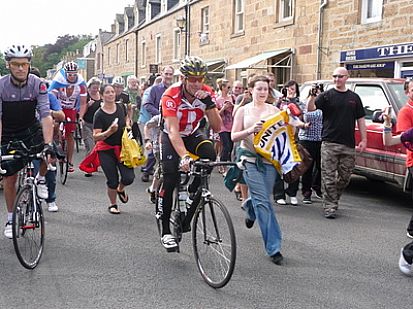 A large following of cyclists, estimated at between 500 - 1,000, and a large crowd of spectators gathered in Castle Street, Dornoch for the event. The ride, blessed with a sunny late afternoon, took a circular route from Dornoch, via the Embo Road to Loch Fleet, then crossed the A9 short of The Mound to take the Loch Buie road to Bonar Bridge, thence returning via Spinningdale and Clashmore.

The large gathering demonstrated the power of the internet and 21st century communication, with one Dornoch resident alerted to the event by a mobile text from a friend in Italy who had seen the 'tweet' on twitter!

A set of photographs can be viewed by inserting 10408 in the search panel on the homepage of the Historylinks Archive.