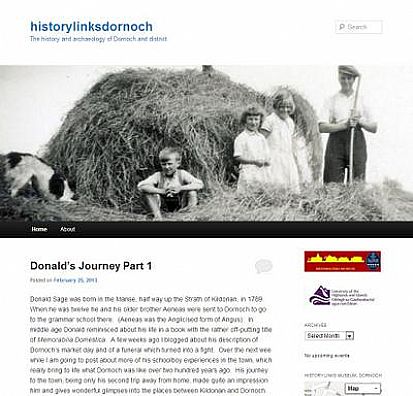 The 'historylinksdornoch' web log ('blog'), dedicated to exploring the history and archaeology of Dornoch and its neighbouring parishes, was formally launched on 21st February 2013.

The blog is a collaboration between Historylinks Museum and the Centre for History at the University of the Highlands and Islands, co-ordinated by Dr Elizabeth Ritchie, Lecturer at the Centre of History and a member of the Historylinks Committee.

Following discussion and agreement in principle at the December museum committee meeting, Dr Ritchie rapidly moved to website development resulting in 7 'posts' of fascinating articles being in place by the time of her demonstration of the blog to the subsequent committee meeting on 20th February.

There was no hesitation in unanimous committee approval with agreement to immediate formal launch.

It is the intention that the blog posts, appearing three or four times each month, will discuss artefacts and documents stored by the museum; museum activities; the history and archaeology that is out and about in the district; and history-related events happening in the area. 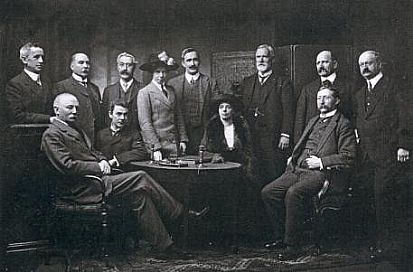 Celebrating the centenary of the Dewar Report ~ 100 Years of Healthcare in the Highlands and Islands.

2012 marked the centenary of The Highlands and Islands Medical Services Committee, commonly referred to as the Dewar Committee after its chairman, Sir John Dewar MP for Inverness-shire. (See photograph seated far left).

The Committee was commissioned to look into the medical services which existed in the Highlands and Islands following the realization that crofters were not covered by the 1911 National Health Insurance Act.

The Dewar Report reviewed reports, held seventeen public sessions questioning 178 witnesses and conducted questionnaires. This gave them a unique insight into life in the Highlands and Islands in the early 20th century and the appalling conditions many people lived under.

The Report outlined proposals for health care reform which led to the first state provided health service in the world - the Highlands and Islands Medical Service.

This service revolutionized medical provision and is considered to be the precursor to the National Health Service.

The 2013 acquistion of the home birthing maternity case dating from the late 1940's belonging to the well loved Dornoch G.P. Dr. Aeneas Macleod formed a most fitting complementary display to the Dewar Report exhibits.