This page provides some background information and a flavour of the objects on display in the museum and in store..

In March 2008 the 'Scottish Museums Council' (now Museums Galleries Scotland) included the Historylinks website in the European 'Multilingual Inventory of Cultural Heritage in Europe' (MICHAEL) database as a "good example of a small museum using online digital images and descriptions to increase access to stored collections". 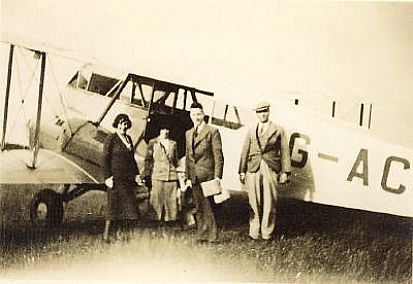 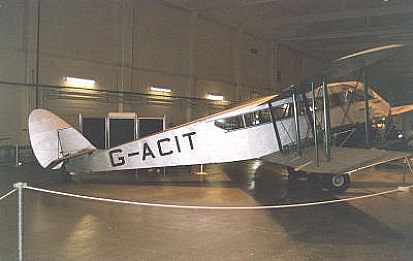 The grass airstrip on Dornoch links was well used in the 1930's. A photograph in the museum collection shows a De Havilland Aircraft Company DH84 Dragon, registration G-ACIT, with a group of people presumably about to board, at the airstrip. A search has revealed that this aircraft, which was first registered on 24 July 1933, is now part of the Science Museum collection. 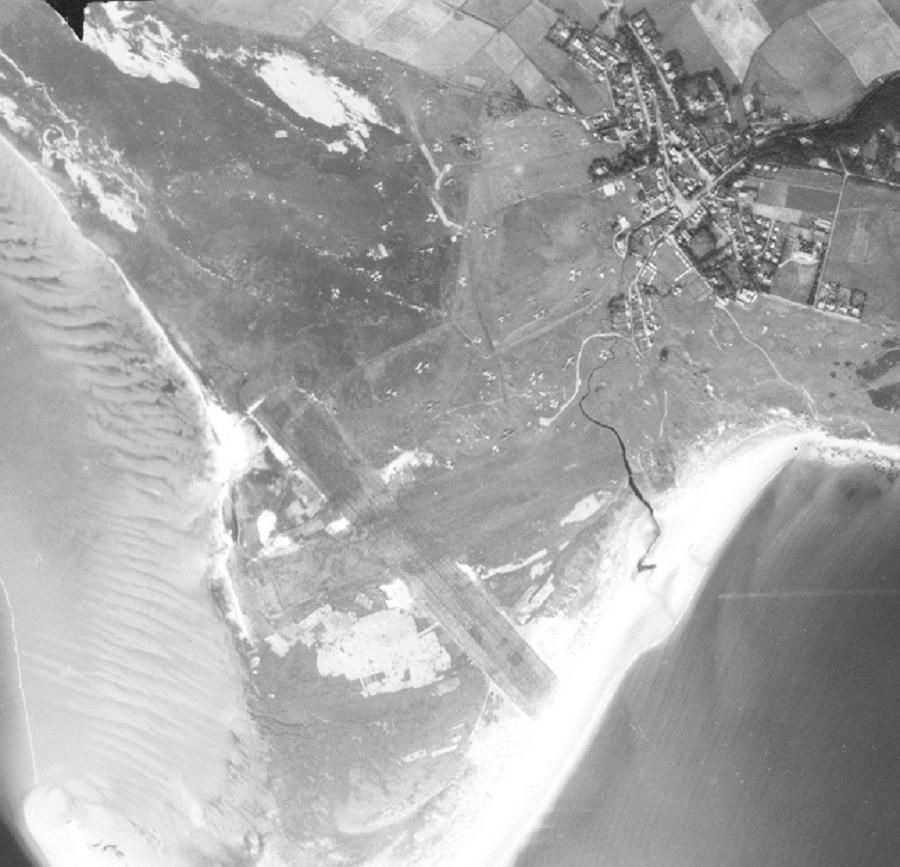 In early 1941, at a cost of £38,000, Dornoch airstrip was prepared for use by the Royal Air Force, and was opened on 10 August 1941 by Flying Officer Smith and 12 men as 40 Satellite Landing Ground (SLG). The RAF 45 Maintenance Unit (MU) was to use Dornoch for the storage of Spitfires, Havocs, Whitleys and Wellingtons. There is a record of the overshoot and damage of Wellington 1C, X9930 on 13 September 1941. The airfield was only in use for a short period, being placed in a state of 'Care and Maintenance' on 30 September 1942, largely as a result of the inability to camouflage aircraft on the open links, thus rendering them vunerable to enemy attack.

Following a period of re-organisation by 41 Group Maintenance Command, Dornoch was taken over by 46 Maintenance Unit, Lossiemouth, with an advance party arriving on 24 September 1943 and the main body on 11 October 1943. 46 MU used Dornoch mainly for storing Beaufighters, 90 being held in May 1944 and 108 in July. In March 1944 a Robin hanger was moved from Field 13 at Lossiemouth and erected at Dornoch. The airfield reached its maximum capacity in April 1945 but aircraft were now being prepared for service rather than storage. An RAF photograph taken in 1944, recently acquired from the Royal Commission for Historic and Ancient Monuments RCHAM, shows around 114 aircraft at Dornoch.

Although there is no mention in 46 MU Operations Record Book, Lancasters were stored for a time at Dornoch.   A photograph, taken for the Cathedral tower, clearly shows Lancasters on the airfield and an ex-fitter, Archie Campbell of Loch Rannoch, recalled working on them and getting a dressing down for using the Witch's stone as an anchor when towing a Lancaster out of soft ground. 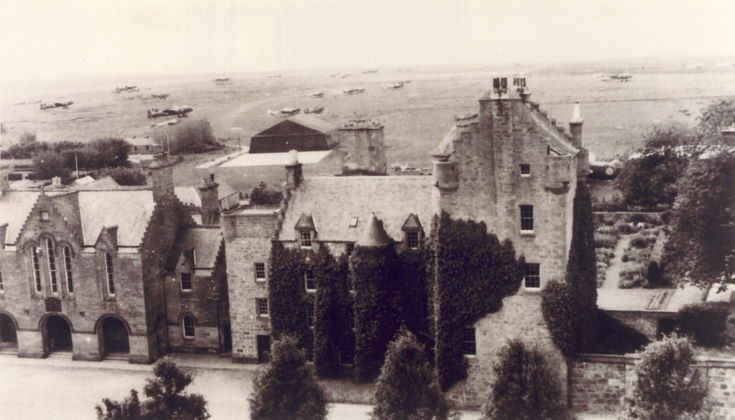 The wartime service of Dornoch airfield ceased on 27 September 1945 when the last aircraft took off and the final load of scrap metal was removed. The airfield formally closed on 30 September 1945.     In 1967 the airstrip was re-established with Loganair Services operating to Wick and Inverness until 1972 when the service proved uneconomic. Currently the airstrip is frequently used by light aircraft and microlight.

For further images of aircraft at Dornoch airfield go to the Dornoch Historylinks Archive, select the Groups tag then 'Aviation'. 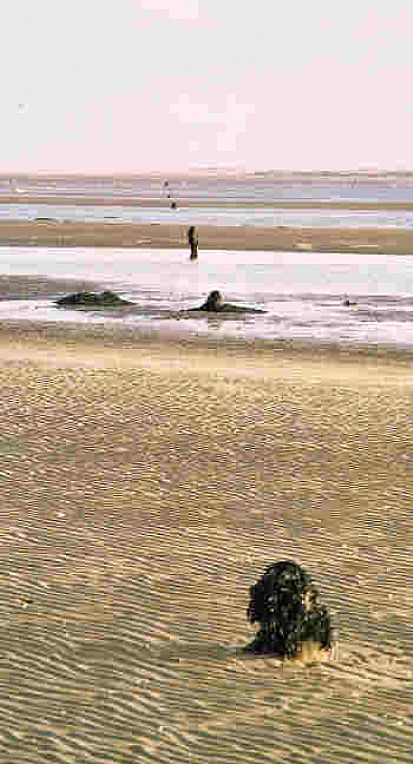 Along the entire east coast of Scotland efforts were made to prevent German landings. In the coastal firths, with large mud flats and adjacent fields, measures were taken to prevent gliders and aircraft from landing. The Germans had used gliders to land troops beside Dutch positions on the large beaches of Holland. Efforts here were designed to prevent that happening. The easiest way was to destroy the gliders as they land by breaking them up.

The basic design was a run of vertical wooden poles set into concrete or even pipes which were placed in the sand. Wire was stretched between the poles which would become entangled around the glider. Onshore in the fields there was also a series of pits dug in a line across the middle of the fields, with the spoil mounded beside the pits. The designs vary depending on threat and available resouces. In Fife where the threat was high, the poles are quite close to together and are in a zig-zag pattern, forming large squares.

These anti invasion measures had a high chance of being effective but their chief role was to deter the Germans, giving the impression of a fortified Britain. 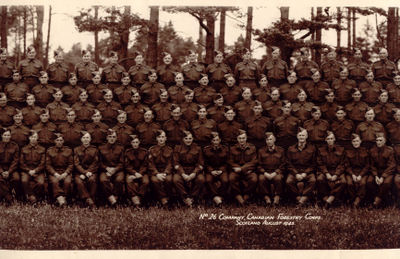 During World War 2 there were two Canadian Forestry Corps camps in close promixity to Dornoch.  One was at Spinningdale and the other, complete with a sawmill, was at Clashmore, at the junction of the A9 and the Clashmore Road.

The collection also includes a large A4 ring file with the title 'The War Diaries of the 26th Company, Canadian Forestry Corps July 1942 - July 1943 produced by Hilary Fife to record the WW2 experience of her husband's grandfather Lieutenant Lloyd Lionel Brown. Lt Brown served in WW1 and in 26 Company CFC based at Clashmore Camp from July 1942 to July 1943.

The file contains three sections. The first provides an introduction to the Canadian Forestry Corps recording the inter government agreement covering its deployment to the UK in WW2, its organisation, unit locations and an outline of its logging practice and experiences in Scotland. It records, inter alia, that "Environmental conditions, chiefly climatic, caused the most serious problems for Canadian Forestry Corps operations.     The second section provides extracts from the official War Diary of 26 Company providing fascinating insights to the day-to-day events and lifestyle of those serving in the Dornoch area.  The third section provides two CDs with jpg images of each of the pages of the War Diary. 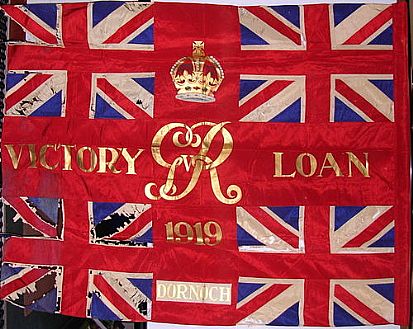 The Victory Loan Flag was donated to the Museum in 2002 but, as a result of its fragile, frayed condition, no attempt was made at that time to photograph the flag. Our Curator, Peter Wild, used the quiet early winter months last year to reassess the task and ultimately took the plunge to produce a welcome colour photograph of this valued object in the museum collection.

The silk flag has Union Flags in each quarter and a central GvR surmounted by a King's crown, with wording 'Victory Loan 1919' Dornoch'.

An excerpt from the Minutes of a Town Council Meeting of 14th October 1919 reads: " The provost reported that, in obedience to a Royal Command, he accompanied by the Town Clerk, had on 9th inst proceeded to Aberdeen. When on board the Royal Yacht "Alexandra", H.R.H. Princess Mary had, on the King's behalf, presented to him, on behalf of the Burgh, the Victory Loan Flag awarded by His Majesty to the town which had subscribed the largest sum, per head of the population to the Victory Loan: and he now laid the Flag on the Council table."

The Town Council meeting resolved that the Flag should be exhibited in the Provost's shop for a week and that thereafter it would be hung in the Council Chamber ad pertetuam Memoriam. With the demise of the Town Council, the flag was entrusted to the museum's care.

Among our 2012 acquisitions was a rare postcard with a monochrome photograph of the first Bonar Bridge, built in 1812, to Thomas Telford's design. This bridge was built soon after the Meikle Ferry disaster and it was destroyed by flood in 1892. 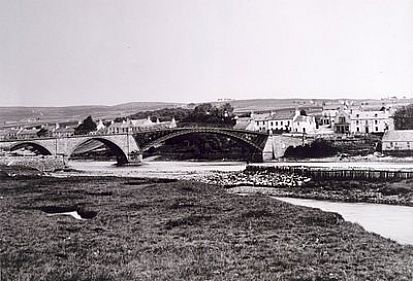 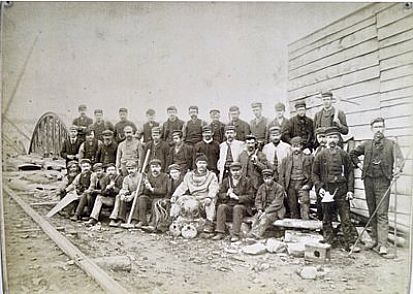 A second postcard shows a group of the construction team, including a diver at centre front, employed in building the second Bonar Bridge in 1893.. This bridge remained in use until 1973 when the current bridge, with greater load bearing capacity,was built. 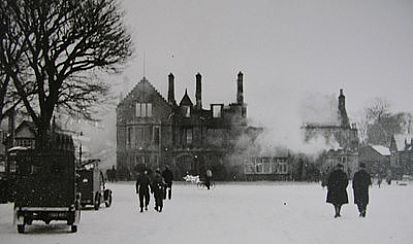 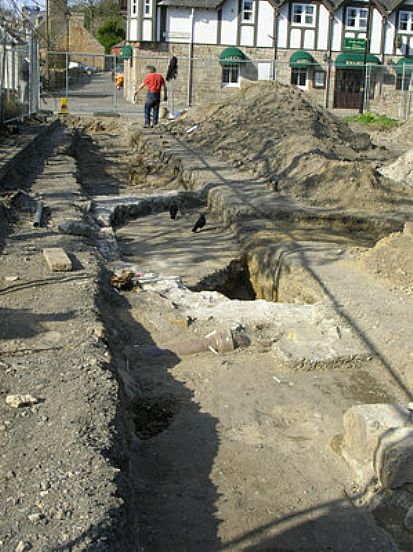 The Sutherland Arms Hotel burnt down in 1941. As a preliminary to the construction of a new building on the site there was an archaeological exploration. This revealed the outline of the old hotel and evidence of earlier occupation. 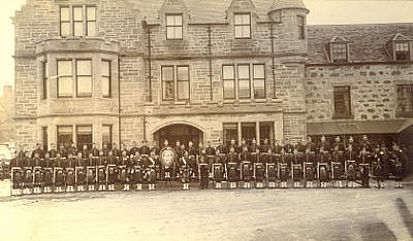 There a many photographs in the museum collection showing the old Sutherland Arms Hotel. One example is the group photograph of the Dornoch Company of Seaforth Highlanders in full dress uniform, taken outside the hotel around 1900. Does anybody know anything about the magnificent shield so proudly displayed?

The collection includes two beautiful drawings from a hand written article 'Notice of a Short Cist and its contents found near Dunrobin Castle Mar:24th 1880'. 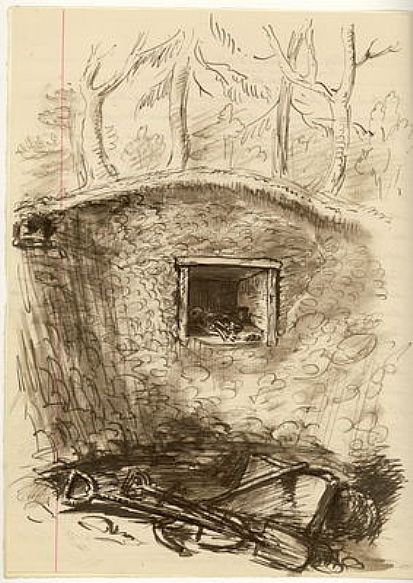 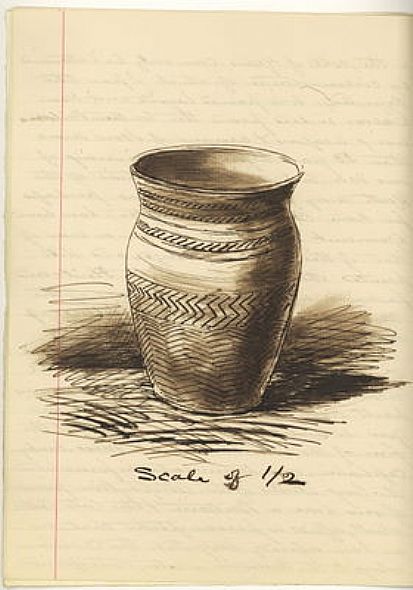 Other interesting items include:

Remarks on Flint Implements found at the Little Ferry

Notes on Cup & Ring-marked Stones with description of a specimen found in the Dunrobin Woods.

Piece of Viking hacksilver from an oval or circular bracelet 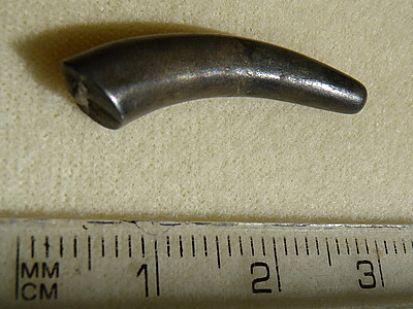 The museum successfully bid for a a classic piece of hacksilver Treasure Trove, officially described as "the terminal of a Viking peannular bracelet of oval or sub-circular section". The piece is in excellent condition, with the original cut and break clearly visible plus a dent on the underside where the force of a blow to separate the fragment flattened the profile of the ring. The piece was found by metal detecting in a field at Pitgrudy, just north of Dornoch and, although such finds are normally part of a hoard, with the intensity of the metal detecting in this area other pieces would have come to light if they existed. This suggests it may have been a solitary loss, as part of trading rather than hoarding.

Hacksilver is the term given to groups of silver ingots and pieces of scrap silver, often from jewellry and tableware that the Viking communities of the Eastern Baltic, Scandinavia, Iceland and the British Isles used as a form of currency. 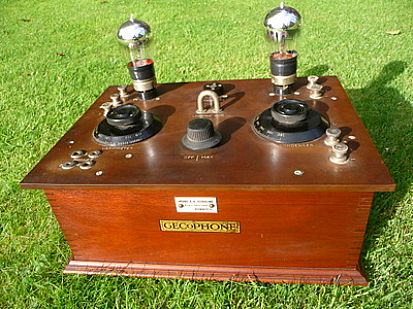 This radio made by General Electric Co (Geco) with the model number 2501 was bought in 1924/5 by Dornoch GP Dr MacLachlin and was one of the first in Sutherland.

The Gecophone two valve radio was used with headphones and two pairs of sockets can be seen at nearside left of the wooden case..

At some point it was repaired by Archbd. R. K. Sutherland, who had a repair shop in the basement of what is now Gordons newsagents, and his trade plate can be seen above the title 'Gecophone' on the front side of the case. The radio was was subsequently acquired by Murdo MacPherson who had it at his croft in Achvandra.

It required two batteries (storage and/or dry for low and high tension) and would have had plug-in coils for medium and long wavebands. The Marconi Osram valves are stamped 'Type approved by Postmaster General' and marked 'BBC' 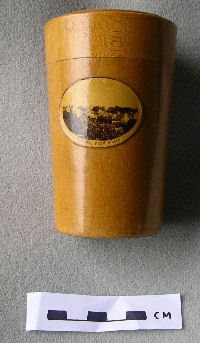 An attractive Mauchline ware glass container has a superb oval image of Dornoch, seen from the north, on one side.

This is a standard mauchline design in light, varnished wood.

Unfortunately the drinking glass that would have come with the container is missing.

A whisky bottle with accompanying note was recently found by a builder working in the attic of a house in the centre of Dornoch. The bottle is a three piece moulded blown bottle in olive–green glass with numerous air bubbles. From the rim detail, body shape and base the bottle can be dated between 1840 and early 1870’s.

The question is where was the whisky distilled? 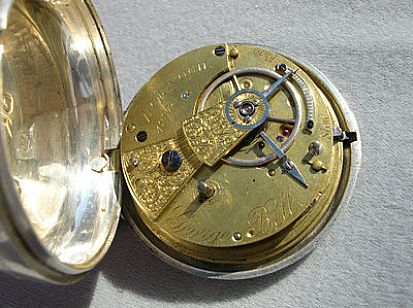 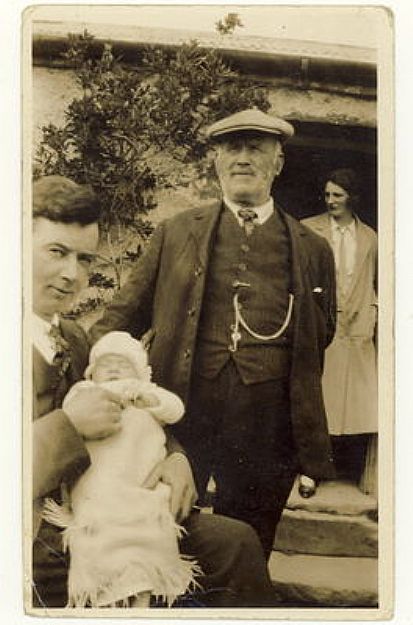 The museum acquired a pocket watch engraved by George Bell of Dornoch with a photograph of the watch worn by William Matheson when he lived at Skelbo, working as a gardener and coachman.